The information given to Tab Lancaster has not yet been made public.

Dominic Casoria, candidate for vice president of corporations and media and current officer, was banned from campaigning for three days.

The original election for the vice president of corporations and media in March was put on hold pending an investigation into unfair voting behavior.

The rescheduled campaign period has now started with only one candidate running. He had previously been opposed by Tabitha Lambie, editor of the student newspaper SCAN.

An unnamed source claims that during the March campaign period, Casoria tried to convince Lambie not to run for the job.

When he was in the Student Union kitchen, Misbah says he heard “the other candidate (Casoria) tried to dissuade them (Lambia), implying that the working conditions were terrible and that the role was not was not what they thought”.

Ashraf continues that she “immediately stepped in to make sure Tabi was encouraged to run and I remember saying we were a great place to work like when I walked in,” she claims, “Dom was saying the opposite”.

Ashraf also acknowledged that there was another SU employee present, and therefore did not know why his presence at the scene was targeted. Despite this, she confirmed that she had reported the incident to the election team. 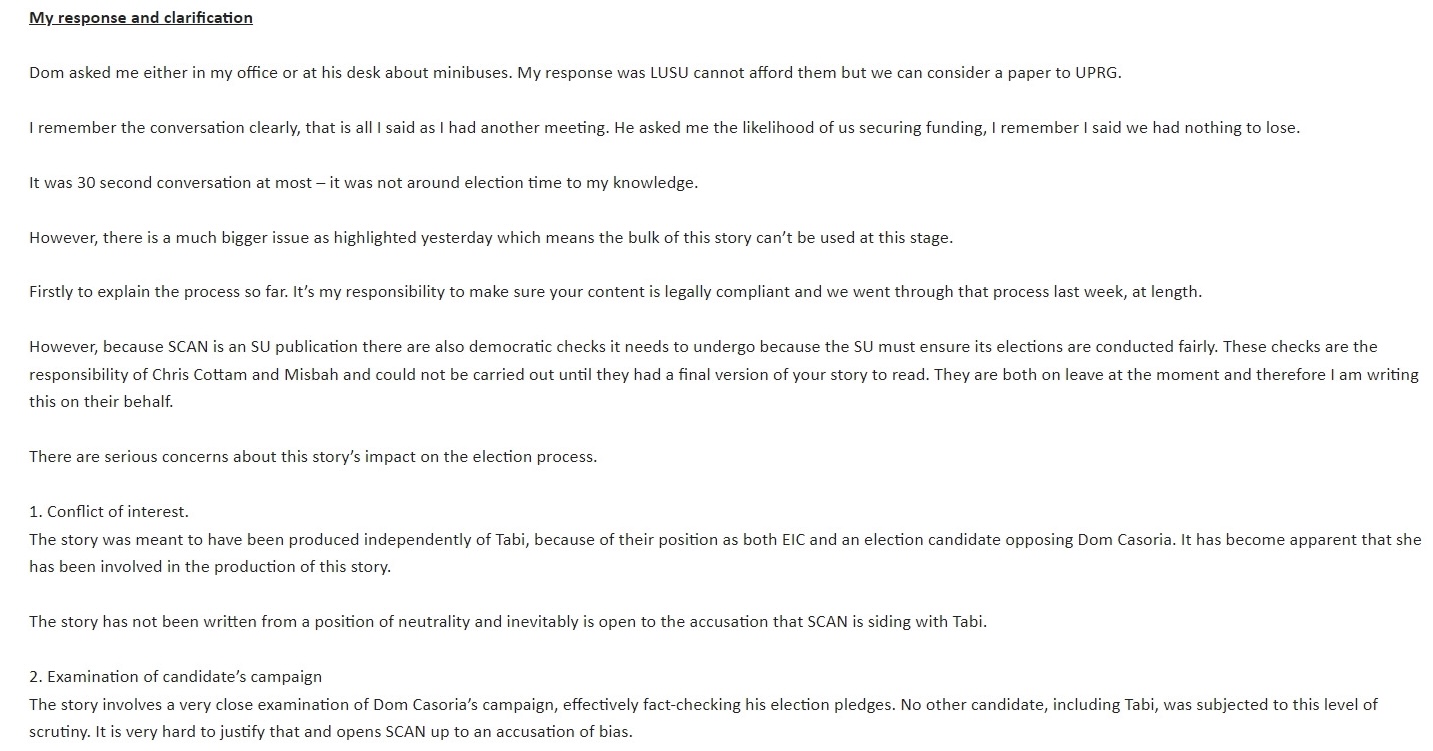 The email also responded to allegations of inaccuracies in Dominic’s campaign, such as his claim to donate minibuses to the company.

In addition to this, the addressed email claims that the student newspaper SCAN produced an article about the campaign which acted as a conflict of interest due to Lambie’s association with the company and therefore there were suspicion that the newspaper was biased towards the candidate.

The email said Casoria had been “vetted” regarding his campaign, in a way that no other candidate was.

In the email, the sender pointed out that the SU, as the publisher of SCAN, cannot be considered to be producing content with a possibility of bias.

Previously the only details released about Casoria’s conduct came from staff at Lambie instagram, shared on April 19 and not including this complaint. Lambie has since retired from the race for the job.

The Lancaster University Students’ Union said that although no electoral rules were broken, the scrutineer concluded that there was “a strong likelihood that the electoral process was compromised and that an advantage unfair has been obtained during this period”.

Following the student union decision, Casoria was banned from campaigning between May 4 and May 6, but will still be allowed to run.

A Student Union spokesperson said: “As it is election time, the Students Union cannot comment on this.”

Related articles recommended by this author