College students and graduates under 40 have nearly TWICE the amount of non-student debt compared to those without a college education, research finds

By Elmira Tanatarova for Mailonline

According to one study, university students and graduates aged 40 and under have almost double the amount of non-student debt compared to those who did not attend university.

Of those in debt, those who attended university have an average of £12,445 in debt, excluding any student loans.

Meanwhile, people who have not attended college typically owe £7,105, according to credit reference agency Equifax.

College students and graduates aged 40 and under have nearly double the amount of non-student loan debt compared to those who have not attended college, study finds (stock photo used)

Nearly half (47%) of university students and graduates said receiving a student loan made them more comfortable with other forms of borrowing.

Paula Roche, managing director of consumer solutions at Equifax UK, suggested that prior exposure to borrowing could increase graduates’ familiarity with the credit market.

She said: “We know that graduates earn more and are more likely to have a mortgage by the time they hit 40, but there are signs that this greater exposure to the credit market is also driven by greater familiarity with, or even desensitization to, borrowing from college.

“Whether it’s credit cards or car financing, using the credit system and building a credit history is one of the best ways to establish a positive credit score, which could give graduates an extra edge when applying for a mortgage later in life. 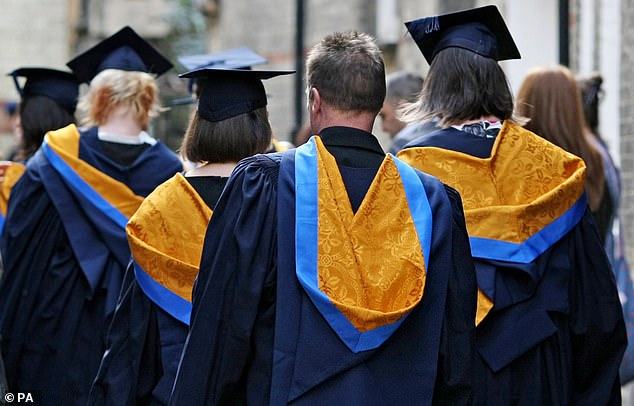 Of those in debt, those who attended university have an average of £12,445 in debt, excluding any student loans (stock photo used)

She added that young people need to be taught how to handle credit responsibly.

Ms Roche said: “While taking out different forms of credit is not problematic when managed responsibly and repaid on time, it is important that all young people understand the different types of credit available and have a vision clear of how their financial history may affect their ability to access it.

Levels of anxiety related to money management were found to be high for all young people in the study, regardless of their background.

Two-thirds (64%) of those repaying a student loan said managing their money caused them anxiety, compared to 57% of those who had not attended college.

It comes as government plans for minimum grade requirements to access student loans could “reinforce” the disadvantage of poorer students, universities said this month.

The government has launched a consultation on its plans for higher education, including the introduction of a minimum of two E grades at A level or GCSE in English and maths to access loan funding.

Universities United Kingdom stated that a minimum entrance requirement could “prevent some of the most disadvantaged students from realizing their potential and reinforce their disadvantage”.

The group added that the proposed controls on the number of students would have a “negative impact on government objectives such as levelling”, while also having a “disproportionate impact” on students from disadvantaged backgrounds.

A spokesperson for the Department for Education said this month: ‘We have more 18-year-olds from disadvantaged backgrounds attending university than ever before, but it is in no one’s interest that young people are pushed into higher education courses that do not lead to good jobs or before they are academically ready to benefit.

“We did not propose to ban anyone from going to university; rather, we start a conversation about minimum entry requirements and ask whether young people should be pushed straight to a full degree, unprepared for that level of study.